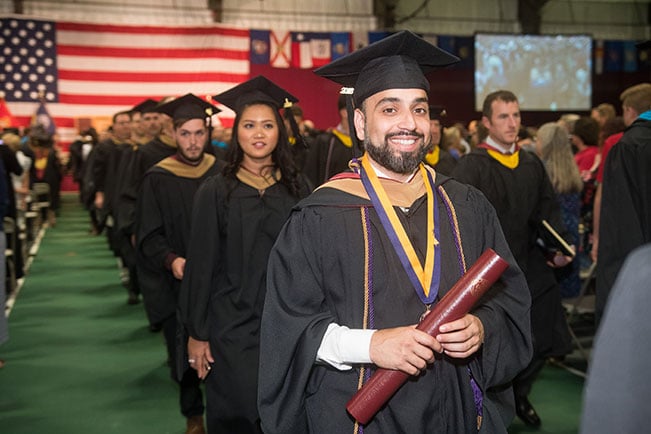 Norwich University’s College of Graduate and Continuing Studies held its annual Residency Conference Monday, June 18th to Friday, June 22nd, 2018. The weeklong conference included a number of academic sessions, lectures and presentations, as well as capstone projects, designed to provide the University’s growing population of online learners with an opportunity to meet faculty and network with peers prior to commencement.

This year, the Residency Conference coincided with the Norwich University Bicentennial Campaign’s Year of Legacy, a period of giving and reflection in which the extended Norwich community had the opportunity to build upon the contributions of nearly two centuries’ worth of alumni in order to create a brand new legacy that will shape the experiences of future generations of learners for many years to come. In keeping with this ethos, the 2018 Residency Conference theme was that of, “Build On the Past. Lead into the Future,” featuring a broad array of experiential learning exercises designed to enrich participants’ academic experiences and thereby expand the Norwich legacy.

Case studies are a staple of the Residency experience, allowing students to complete detailed analyses in order to develop real-world experience in a given field and reinforce concepts learned therein.

Students in the Master of Business Administration (MBA) program had the tremendous opportunity to work with Vermont Village, a local cannery that specializes in Vermont grown, organic products such as vinegar, sauces and butters. With Vermont Village poised to expand its operations, Norwich MBA students were invited to take a holistic look at Vermont Village’s business and identify obstacles to organizational growth and prosperity. Specific areas of concentration included marketing, project and resource management, leadership, operations and finance. Subsequently, students analyzed their findings and devised a comprehensive set of recommendations for Vermont Village’s leadership.

The Master of Arts in International Relations and Master of Arts in Diplomacy programs undertook a number of case studies as well, focusing on the ethics of diplomatic leadership and strategic decision making. The questions posed by these case studies were characterized by complex moral quandaries, forcing participants to weigh two equally problematic outcomes and arrive at a justifiable conclusion. More than finding the “correct” answer, these exercises were concerned with encouraging students to carefully analyze all possible outcomes in order to identify how they made their ultimate decisions.

These program case studies were extremely valuable to participants in that they typified Norwich University’s commitment to experiential learning to spur creative thought and innovation.

Norwich’s dedication to hands-on, experience based learning initiatives is a cornerstone of the University’s global legacy. As such, the annual Forensics Exercise demonstrates the scope of what is possible with unconventional exercises that build upon classroom instruction in order to provide valuable experience. Combining principals of incident response, computer forensics, criminal justice and public safety, the Forensics Exercise began with the discovery of a staged crime scene at which student investigators from the Criminal Justice, Public Administration, and Information Security and Assurance master’s programs gathered physical and digital evidence that took them on an in-depth investigation that spanned the Norwich campus. The scenario for the crime was written by Vermont mystery author, Archer Mayor and was designed to test participants’ abilities to preserve evidence assets and utilize emerging trends in forensic investigation. Local and state police entities—such as the Northfield Police Department and the Vermont State Police—joined forces to support student participants throughout the course of their investigation, granting participants unprecedented access to sophisticated technology and professional mentoring while building a solid foundation for investigative practices and procedures.

Named in honor of retired U.S. Army Major General Russell Todd and his late wife, Carol, the Todd Lecture Series brings luminaries in business, politics, science, the arts and other industries to Norwich’s Northfield campus with the goal of creating a learning community that is “global in perspective, engaged in personal and intellectual transformation and dedicated to knowledge, mutual respect, creativity and service.” In keeping with this mission, entrepreneur, magician and motivational speaker, Vinh Giang presented his keynote address entitled, “The Psychology of Illusion, the Power of Perspective” on Tuesday, June 19th at Plumley Armory. Giang’s considerable talents as a magician served to reinforce his valuable insight into a wide array of topics including influence, perspective, goal-setting and creative thinking; Giang describes the link between illusion and business thusly: “I believe that magicians are salespeople; they sell one of the most difficult products in the world. It takes thousands and thousands of hours to be able to sell the illusion, to be able to really sell the magic. Imagine if you applied the same mindset to your company – imagine if you applied the same dedication to your business – think about what you could achieve.” As the CEO of his own successful company, Luminary Productions, it is clear that Giang lives by the magical, motivational message he espouses. The keynote address in its entirety can be found at http://tls.norwich.edu/vinh-giang/.

Author, highly decorated U.S. Marine and Norwich Trustee, General Richard “Butch” Neal delivered the 2018 Commencement address to over 500 graduating students on Friday, June 22nd. During a 33-year career, General Neal commanded at every level within the Marine Corps—battery, battalion and brigade—and was the Commanding General of the Second Marine Division. He served two tours in Vietnam and was twice honored with the United States’ third-highest award for gallantry, the Silver Star Medal. Among his many decorations, Neal has received the Defense Distinguished Service Medal; the Bronze Star (with valor device); the Defense Superior Service Medal (with one oak leaf cluster); and the Purple Heart. In his capacity as commencement speaker, General Neal drew upon his lifetime of service through leadership to inspire Norwich graduates to similar action. His memoir, What Now, Lieutenant? served as the basis for his speech; Neal urged graduates to anticipate instances in which they would be charged to lead, and to rise to the occasion by drawing upon the foundational values of their Norwich education. Read our exclusive interview with General Neal.

In 2017, the Norwich University branch of SALUTE Veterans Honor Society welcomed students from the College of Graduate and Continuing Studies for the first time; this year, nearly 100 graduating students joined their ranks. Founded at Colorado State University in 2009, SALUTE is the only national honor society dedicated to honoring and empowering military and veteran students studying at both two and four-year universities. Members are expected to uphold the ideals of SALUTE—service, academics, leadership, unity, tribute, and excellence—at all times, thereby promoting honorable conduct in the classroom and engagement with local communities. The students were inducted during the 2018 Residency Conference, where Norwich President Richard W. Schneider performed the honors, and each received an official certificate of membership and a challenge coin from SALUTE. These individuals were clearly distinguishable at the 2018 Commencement ceremony, where they donned ceremonial honor cords colored red, white and blue. The relationship between SALUTE and Norwich University is one of complementary values: Norwich urges students to “expect challenge” and “achieve distinction,” while SALUTE stresses the importance of visible and impactful action in everyday life.