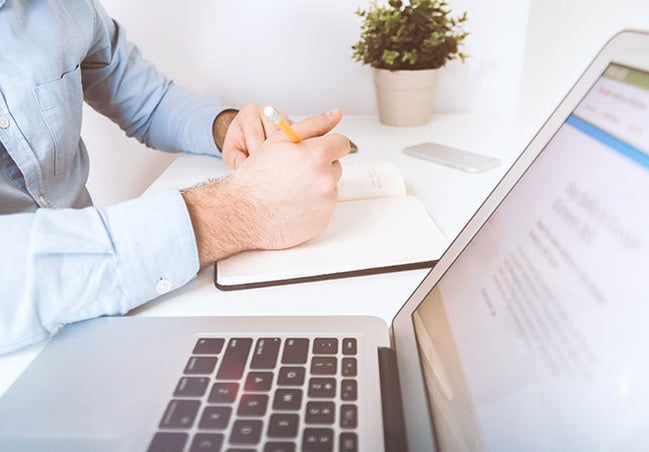 A Big Deal at the Time

In the early 1990s, Bill Clements highlighted students in his college classes at Norwich University on websites he built from scratch.

“I’d post a ‘Student of the Week’ and the students really got a kick out of it,” he says. “They’d call home to their families and say ‘hey, Mom, my picture is on the Internet!’”

It was a big deal at the time, Bill says.

That was more than 20 years ago. Now, Bill is Vice President and Dean of the College of Graduate and Continuing Studies at Norwich, overseeing the learning of the approximately 1,800 students enrolled in online programs.

A History of Service

Founded in 1819, Norwich University is the oldest private military college in the United States and is considered the birthplace of the Reserve Officers’ Training Corps (ROTC). With a student body of approximately two-thirds in the Corps of Cadets, the school’s online population also serves a high proportion of military students.

“Overall, I’d say the online-only degrees are 40% military students,” Bill says. “We get a lot of students who are military officers preparing for promotions or additional leadership roles and are looking to our online programs to bolster their professional capabilities,” Bill says.

The university recently conducted a Gallup survey of its alumni and the results confirm what Bill has always known to be true.

“We’ve heard from our students and alumni—military and civilian—that our online programs made it easier to earn a degree,” he says. “They graduate and get good jobs with good salaries.”

“There’s been a positive impact on their lives as a result of their education.”

Thirty years ago, this month, Bill was teaching at Temple University and finishing his doctoral degree.

“It was a big week for me,” he recalls. “I had just signed my contract at Norwich, had a birthday, my second daughter was born, and I was defending my dissertation.”

Bill recalls talking to a colleague also on the verge of completing his doctorate about where they might be in 30 years.

“We knew we wanted to be in leadership positions that would allow us to be a part of the changes we knew were coming,” he says. “We didn’t know what those changes would look like, exactly, but we were eager to begin our careers.”

That colleague went on to have a successful career in higher education and together, Bill says, they’ve seen the evolution of “higher ed 2.0.”

“When we went through school, higher education was still ‘version 1.0.’ It was lecture halls and slides full of notes,” he explains. “Throughout my career, I’ve seen the evolution of ‘version 2.0,’ where we took that physical classroom and moved it online with little change.”

But now, Bill says, he’s looking forward to the next 30 years and the evolution of higher ed 3.0.

He also believes higher education is a lifelong process.

“You can’t just get a degree and get a job and never go to school again in today’s economy,” he says. “How is higher education going to adapt to that?”

In the last few months, the College of Graduate and Continuing Studies has expanded its online portfolio with new educational opportunities to help working adults, like you, enhance their knowledge and skills. This includes graduate-level certificates in public administration and information security and assurance discipline areas.

The Leadership and Change Institute, a community of change leaders with a mission to tackle the toughest leadership challenges, has launched its first six-week online professional development course titled Leadership Challenge I. The offering is designed to help individuals hone their skills and reach their career goals by helping build their leadership capacity to address today’s leadership challengers.

How to Navigate the Norwich Online Virtual Classroom