History Alumnus on the Transformative Power of Community Service 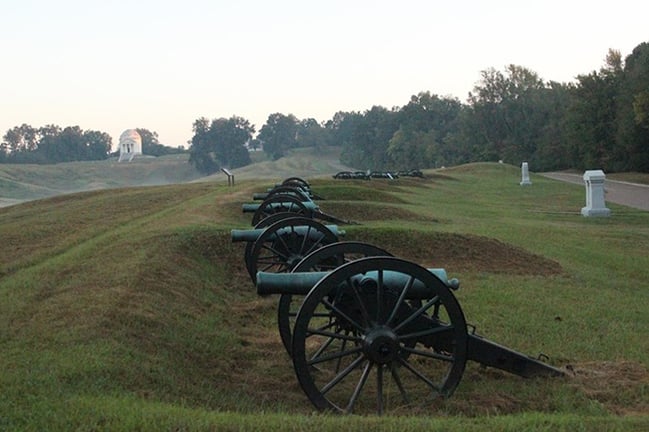 Within the heart of Vicksburg National Military Park (VNMP) in Mississippi, thousands of Civil War dead rest peacefully in Vicksburg National Cemetery. Countless headstones are identified only by numerals, since the name of the interred is unknown. Other headstones include a little more information. Many simply have the name of the deceased. Some acknowledge a name and his rank. Still fewer list a name, a rank, and his Federal unit. Yet, clearly, with every headstone there is a story of a unique life and a death.

I encountered one of those stories this past fall when VNMP allowed me to volunteer in the Park for four weeks. In the course of my visits to the Cemetery, I came across two headstones that only presented questions: one at site 4267 for “E. C. ROBBINS, U.S.C.T.”, and the other at site 4303 for “E. C. D. ROBBINS, CAPT, U.S.C.T.” Obviously, I was puzzled. Were these different Union soldiers who shared a similar name, and attached coincidently to the United States Colored Troops? Were they the same individual? And if they were the same, why two gravestones? I soon found answers. The headstones are for the same soldier, one issued by the U.S. government and the other emplaced by family and friends. Edmund C. D. Robbins, a farmer and teacher, enlisted in the 17th Illinois Infantry at the outset of the Civil War, was commissioned in 1862, and promoted to captain when he accepted a position in the 53rd United States Colored Infantry. In late September 1864, after years of battle experience, Captain Robbins acknowledged to his family and his chaplain that he had grown tiringly despondent. A few weeks later, he entered his tent and ended his life.

Captain Robbins’ story deeply moved me. Had VNMP not welcomed my request to volunteer, I most likely would never have “met” him. As I write this, I still find myself in awe of Captain Robbins’ service to this nation, and heartbroken by his death. Indeed, I came to respect how much his life and death make this Park and its Cemetery a truly noble place. So, I wanted to tell my story about this volunteer experience. And I wanted to tell it to the Norwich community. And I wanted to tell it, because I hope that students, graduates, and friends of Norwich might better appreciate how their sacrifices and service through their life choices and career paths contribute to our common good. My path to this volunteer experience at VNMP really begins with Norwich.

During my grade school years in Northfield, I had little understanding of the Vietnam War and the implications of the commitment students made to Norwich’s Corps of Cadets. That changed when one of the officers who worked with my father at Norwich and lived in our apartment complex, Major George Ellery Hussey, deployed to Vietnam. In May of 1970, we received news that Major Hussey had died in combat. Two months later, my father then began his own journey to Vietnam, and of course I was intensely worried. While the Hussey family grieved the death of a husband and father, I cried with relief when mine returned home safely. With Major Hussey’s and my father’s assignments to Vietnam, I developed a deeper appreciation of the sacrifices that all the cadets of Norwich were making during their years in school; and for most of those, their subsequent national service through a military commission; and for some of those, their willingness to accept orders that brought them to Vietnam. I was a young teenager when the war ended, and I knew of its turmoil since it was a part of my personal story, yet I could only cherish my memories of good cadets who served this nation well during that time. Cadets who helped form my sense of the value of national service. Cadets I now see in the light of the goodness of Captain Robbins’ own service.

When I discovered in 2007 that Norwich offered a graduate degree in military history, I remembered the commitment of the cadets from 1968 to 1970 and the impression it left on me. Thus, I applied and trusted that, if accepted, it might lead me to a place where I could contribute something to our nation’s good, however small. Thankfully, I was invited into the program. The experience was all that I wished it would be. My classmates were invigorating; the faculty was engaged and responsive (particularly my Capstone director, Dr. Charles Oliviero); and the courses were immensely enriching. As I moved through my courses from semester to semester, I found that the enthusiasm of my classmates and instructors about military history planted a seed. I came to dream of connecting one day with the National Park Service; in particular, I hoped, a National Military Park.

I had visited Vicksburg National Military Park in 1996 while I was transferring from Marine Aircraft Group 14 in Havelock, North Carolina to the 9th Engineer Support Battalion in Okinawa, Japan. That visit to the Park was breathless and impressive; inspiring and unforgettable. And it was that park at which I hoped to volunteer, and explore how the skills I gained through my studies at Norwich could come alive. After many messages back and forth with VNMP’s Volunteer Coordinator, Molly, dates were finalized for my volunteer experience.

The drive from my home in Arizona to Mississippi was long, but intimately important. It gave me an opportunity to prepare my thoughts and emotions. I was going to hallowed ground, where American women, children, and men—black and white—sacrificed so much and served so bravely. I was going to assist in the care of a national treasure, and be present for visitors from across this nation and around the world who desired to experience a tragic, yet necessary piece of American history. In a sense, the drive for me felt like a pilgrimage.

A few days after arriving in Vicksburg, I was introduced to the staff at the visitor desk and through the next few days, became acquainted with other Park personnel, both government and civilian, paid and volunteer. Each staff member proudly told me about his or her work responsibilities, which helped me understand their unique contributions to the Park and its benefit to the visitor experience. In no time, I was invited into their work and asked to take on numerous projects. Not least among these was the research I was encouraged to pursue related to Vicksburg National Cemetery. I felt useful, and was grateful to the Park personnel for trusting me to share in their responsibilities. Within a week at Vicksburg, I began wondering why these good people give all, or even part of their working lives in service to our nation’s heritage. I witnessed people who care, people who are passionate about the Park and how it inspires visitors to appreciate our American story. And thankfully, these personnel invited me into their good work. They helped me embrace a sense that I was doing something truly worthy, even if in only a small way. I went to the Park to serve; but in the end, I was the one who was served.

In Vicksburg National Cemetery, it must be remembered that all the interred, known and unknown, served this nation. They served so that cadets might come to Vermont from fifty united states and be formed in intellect, character, and emotion to render their own service to our country. This Norwich tradition continues, because good people like the cadets from 1968 to 1970 and staff like Major Hussey recognized its import. And happily, today, Norwich welcomes both cadets and civilian students to its campus. Of these, many will serve the nation in the military; others will serve our nation’s interests in the private sector; and, hopefully, some will choose to serve through a public agency, like the professionals and volunteers at Vicksburg National Military Park.

It is good that we have the stories like that of Captain Robbins to shape and guide and encourage us. His life is not to be mourned, but celebrated. He served this nation well, while he bravely wrestled with the stress of that service. As each of us moves through life, we create our own unique stories. And in as much as it includes service to the common good, our story will be a fine one indeed.