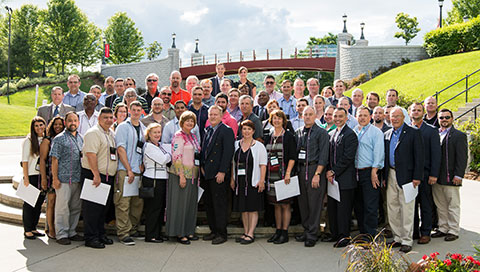 For the first time in chapter history, the Norwich University branch of SALUTE Veterans Honor Society welcomed students from the College of Graduate and Continuing Studies with an exclusive induction ceremony on Tuesday, June 20th. Norwich University’s College of Graduate and Continuing Studies is pleased to recognize its student veterans by offering them the opportunity to put Norwich’s core values into practice with membership in SALUTE Veterans National Honor Society. The SALUTE Veterans Honor Society induction ceremony for CGCS students will become a staple of the annual Residency Conference, giving Norwich the opportunity to honor students who have gone the extra mile in service to country, community and family.

Founded at Colorado State University in 2009, SALUTE is the only national honor society dedicated to honoring and empowering military and veteran students studying at both two and four-year universities. It is clear that SALUTE National Honor Society shares Norwich University’s commitment to serving the needs of military students, but for what does “SALUTE” actually stand? Six tenets comprise the core values of SALUTE: service, academics, leadership, unity, tribute (acknowledging the hard work and sacrifice of others) and excellence. Members are expected to uphold the ideals of SALUTE at all times as well as model discipline for prospective participants, thereby promoting honorable conduct in the classroom and engagement with the local community.

According to Judith Sassi, advisor to College of Graduate and Continuing Studies students seeking membership with SALUTE, the Norwich University chapter welcomed an unprecedented number of online students in this first year of eligibility. “[2017] marked the first induction of SALUTE members from the College of Graduate and Continuing Studies. There has been a chapter on campus for several years, but this was the first time our online community was able to participate in the organization.” Out of 163 inductees (57 undergraduates and 106 graduate students), 67 students were able to attend the induction ceremony in person during Residency Week. Norwich University’s President Richard W. Schneider performed the honors, while inductees received an official certificate of membership and a challenge coin from SALUTE; these individuals were clearly distinguishable at the 2017 Commencement ceremony, where they donned ceremonial honor cords colored red, white and blue.

Following graduation, members join SALUTE’s sprawling, nationwide network of military personnel who seek to translate their discipline and achievement to serving their communities. In this way, SALUTE and Norwich University personify complementary values: Norwich urges students to “expect challenge” and “achieve distinction,” while SALUTE stresses the importance of visible and impactful action in everyday life. It is at the intersection of adversity and the will to overcome that Norwich and SALUTE empower military and veteran students to set precedents for leadership, service and lifetime achievement the likes of which will inspire others to conquer their personal limitations.