Spotlight: The Intangible Benefits of A Norwich Education 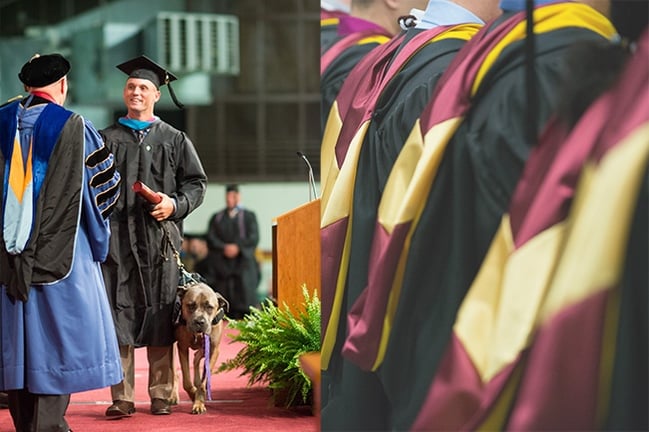 In June of 2014, I had the honor of joining the ranks of Norwich’s alumni, graduating with a Master in Public Administration (MPA) and a concentration in Leadership. I began the MPA program as a newly minted lieutenant in the Marine Corps. This role as an officer would come after serving ten years enlisted; I would soon be standing in front of Marines, as their leader. There could not have been a better time in my career to have started the program, as every day I was able to put into practice what I was learning that week and then reflect upon it in the weekly discussions. But as I look back now and think about the intangibles that Norwich has given me, a whole new perspective comes to mind.

One of the most important papers I have ever written was for a class on social intelligence, and the topic was being authentic. In the spirit of that essay, I must disclose that I had also started the MPA program in the upswing of a five-year battle with post-traumatic stress (PTS) from time spent in Iraq. When I began my studies, I was in desperate need of confidence in myself and my ability to stand in front of Marines to ask them to do the things that are hard. Norwich, and everything it embodies gave me the tools that helped me to gain back that confidence I once had.

When it came time to step in front of those Marine for the first time, I had decided that I would break the spell of misinformation and disclose (being authentic) that it was ok to ask for help and that I had been doing so for a few years. Of my 13 years of service, these conversations were the most rewarding. Norwich emboldened me to share my struggles and understand that I wasn’t weaker because of them, I was stronger. The strength of this institution comes from its staff, which taught me leadership through compassion, empathy, and humility via their actions and instruction.

I began my last semester at Norwich having had a fifth spine surgery and my wife (also a Marine) deploying to Afghanistan. Panic set in shortly after she departed and school work became near impossible. I soon turned to Norwich for help, as it appeared that graduation would need to be moved to a later date; little did I know what would happen when I asked for help. Dr. Rosemarie A. Pelletier (Dr. P), director of the MPA program, soon took up the cause and said something I will never forget: “Come hell or high water, you are going to graduate this summer!” With her guidance and care, Dr. P took me under her wing and pushed me to the finish line. Not only did Dr. P mentor me in my studies, but would also check-in to see how my wife was doing abroad. Her actions were what reinforced the almost two years of education I had just received. 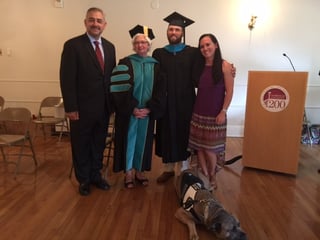 Upon medically retiring from the Marine Corps, I decided to further my education and pursue a master’s degree in Cyber Operations, while working with Vetscape, a veteran-run nonprofit that seeks to help veterans transition to civilian life. As a newly formed nonprofit, I hope to take what I’ve learned both in-and-out of the classroom, and help Vetscape grow so that it can make the biggest impact possible. I hope to continue passing the torch of compassion, empathy, and humility that Norwich has passed to me to this next generation of veterans.