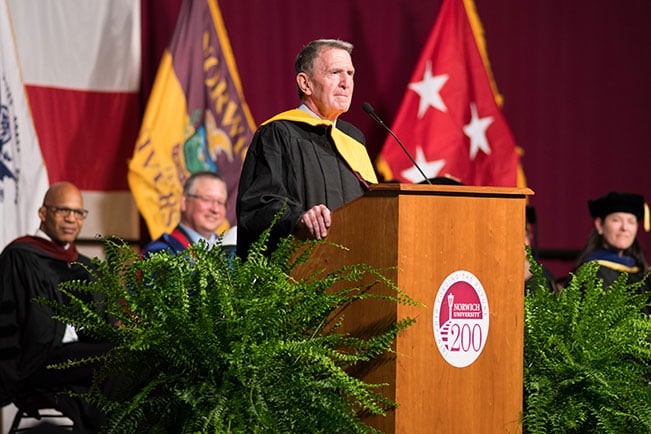 On June 22nd, 2018, the College of Graduate and Continuing Studies at Norwich University was honored to hear a commencement speech delivered by General Richard ‘Butch’ Neal. We sat down with General Neal after his speech to talk about leadership.As a four-star general, General Neal served as Assistant Commandant of the Marine Corps after serving twice in Vietnam, as well as in Operation Desert Storm. He has received awards including the Defense Distinguished Service Medal, the Silver Star Medal with Gold Star, the Defense Superior Service Medal with Palm, the Bronze Star Medal with Combat V and the Purple Heart. Upon retirement, General Neal wrote the book What Now, Lieutenant? to address certain aspects of leadership that he learned and developed over the course of his career. Questions from the interview that follows were derived from the contents of the book as well as from snippets of Neal’s commencement speech.

When you were in Vietnam in 1970, you mention the importance of adapting to the Vietnamese lifestyle, including their food, because it built trust and acceptance. Talk about the value and components of building relationships.

I had not had the advantage to go to the language school, which was an intense 4-to 5-week program, which allowed us to be able to speak reasonably with the community. I was able to communicate with my counterpart. I had reasonable French and most Vietnamese officers spoke French. Speaking with him, he emphasized the need to understand and embrace customs and traditions. Living with my Vietnamese counterpart, I celebrated holidays with him as if they were my own. I paid him $50 per month for food and ate with them. It built trust and acceptance on both sides. They were good fighters, I was a good planner and could bring in air support, so we supported each other.

In What Now, Lieutenant? You speak about a situation in which you had to “chew out” den members in Quantico. You proceeded to act completely normal toward them just thirty minutes later. How did this type of behavior affect the culture of those you worked with?

I was what they call “den daddy”. After classroom instruction we would go down into the den and discuss what we had instructed on. With that kind of group, you become really close with those 10-12 people and know them real well, their strengths and weaknesses and the rest.

They were young captains, I was Lt. Col. They did something that really upset me, I don’t remember what it was. I chewed them out hard. I told them, “I expect you to act as professionals. You’ve disappointed me.” We really had a tremendous relationship. I knew and they knew the issue was not going to happen again. When I saw them thirty minutes later, it was as if nothing had happened. It was an awakening for them, it was a special moment for them because it showed a compassionate leader but also a demanding leader. You can be both without sacrificing good order and discipline within the organization.

When I left, they had a going away party for me. They put together a pamphlet of pictures, me as a cub scout and a fat baby, and there was a page for “The Evening of Death-Threat Neal”.  Doing that, it showed them that I cared about them but that they had certain standards to follow and they understood that. Most times you get chewed out, you have a cloud hanging over head for weeks, and I didn’t want it to be that way.

Crist, he had already sent guys to Mole Hole [an empty building in a remote part of MacDill Air Force Base where colonels who failed to measure up to General Crist’s standards had the dubious distinction of being condemned pending reassignment or retirement]; talking to him, we were fearful of pushing back. He knew I was right, but I was on egg shells for the foreseeable future. I said, “I may be naive but I’m not wrong.” Everyone probably all figured I was going to the Mole Hole after that, but I didn’t. Crist never apologized but he recognized I was right. The way he treated me, he probably welcomed someone that had the gumption to stand up to him. He took my word from that point on.

The learning point I took with me? You can’t be less than candid. People don’t want to hear about how they are the greatest thing. You have to be candid, forthright and honest with senior people.

During your Commencement Speech, you spoke about courage, dedication, integrity and judgement. What is most important?

Courage, dedication, integrity, judgement. I’m a believer that the four of them, plus common sense and enthusiasm, they all lead to a sense of trust by the people you work with on a routine basis; trust and confidence I guess. Collectively, those are the real strengths and the words you should embrace.