Value of a Civilian Education for Military Personnel 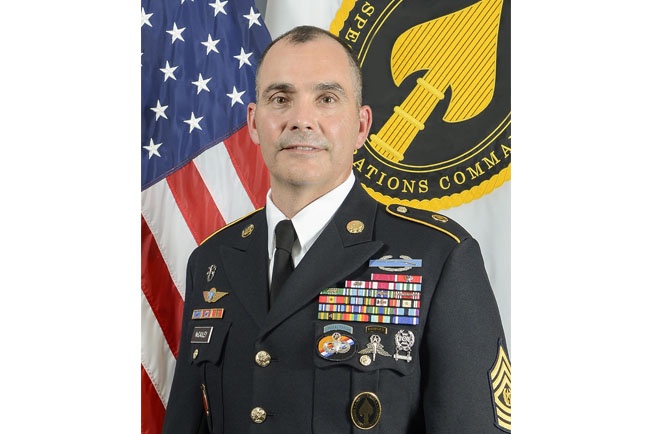 It is always an honor to have the opportunity to discuss education on behalf of the Armed Forces. As I thought about what I wanted to say, I came to the realization that the only way to properly express myself would be to put into context the challenges that my boss, General Raymond Thomas, faces on a daily basis. General Thomas commands roughly 73,000 uniformed men and women, plus another 12,000 or so civilian members, as they collectively meet this nation’s most difficult challenges head-on. We have folks that are conducting some of the most difficult missions imaginable; from unconventional warfare to nation building, from psychological messaging to cyber operations, from partnered operations to counter-terrorism. In short, our operators and supporters conduct special operations from across the full spectrum, all while working within an incredibly difficult and often convoluted world order.

"Special Operations non-commissioned officers must not only understand strategy and policy, they must have a deeper understanding of the commander’s intent in order to execute disciplined initiative to make informed decisions, often in difficult or unclear circumstances."

Currently, more than 8,500 Special Operations personnel are deployed to more than 85 countries. Subsequently, this asymmetric environment demands a very different type of warrior than was prevalent in the 1980s when I came into the military. At that time, the enlisted leader was expected to maintain a very tactical level focus in order to defeat the former Soviet Union. Strategic level discussion and understanding were rightfully eclipsed by the tactical and operational levels of warfare. For Special Operations personnel, this has changed dramatically during the decade and a half following September 11th, 2001; Special Operations non-commissioned officers must not only understand strategy and policy, they must have a deeper understanding of the commander’s intent in order to execute disciplined initiative to make informed decisions, often in difficult or unclear circumstances. This reality is necessitated by the incredibly challenging and constantly evolving strategic environment that exists today.

My commander must navigate the treacherous waters where politics, diplomacy, security and ideology come together to form an often-chaotic new reality. He must interact with foreign heads of state, current and former U.S. Presidents, members of Congress, Military Chiefs, resistance movement leaders, civic leaders and many more. My commander must make global decisions that balance regional equities with U.S. foreign policy. Simultaneously, he must ensure that USSOCOM provides the best trained, best equipped, and most capable Special Operators, able and prepared to deal with the “wicked” challenges we face as a nation.

As the senior enlisted advisor to General Thomas, I am afforded unparalleled access to the commander. I participate in most meetings and engagements, and provide feedback on issues across the operational spectrum. Most importantly, the commander relies upon me to tell him what he needs to hear and not necessarily what he wants to hear when it comes to these issues; he trusts my judgment. In order to be effective, I must understand U.S. Foreign Policy, grand strategy, the National Military Strategy (NMS), the QDR, QDDR, NDAA, and a number of other documents that help the commander navigate national intent and form his strategic vision. It is only then that I can help articulate the “why” of the commander’s decision making to the force and help ensure that we are properly preparing our operators for the environment in which they must work. You would probably be surprised to know that the only prerequisites for this role are a GED and the minimum required PME; there is currently no civilian education requirement for the senior enlisted leader, regardless of level.

Fortunately, that deficiency has been identified and is being rectified in both the joint and special operations professional military education pipelines. Alongside the Keystone Course, the Joint Professional Military Education I and II (JPME) courses have made a dramatic difference in providing a proper military education for our greater joint force. On the Special Operations side we have started the Joint Special Operations University (JSOU) to complement the JPME and Keystone courses with our own education system that delves into those areas that are unique to SOF. The result has been a dramatic increase in the understanding of the “whole of government” approach and how to best facilitate all instruments of national power in conflict.

"This civilian education was of greater value to me than I ever could have imagined, as I continue to draw upon it in my daily work."

From a personal perspective, the education that I received while attending Norwich University was instrumental in my development and success as a leader. The curriculum not only helped me develop my critical thinking, research, and writing skills, but also helped me gain an appreciation for perspectives very different from my own. As an example, going into the International Terrorism class, I believed there was nothing that I could learn from the coursework that I hadn’t already learned in 20 years of firsthand experience; as it turns out, I learned more in the 8 weeks of that course than I did in 15 years of practical application. My professor’s understanding of terrorism and its varied and complex origins opened my eyes to a completely different way of seeing (and subsequently treating) its underlying causes. This civilian education was of greater value to me than I ever could have imagined, as I continue to draw upon it in my daily work.

I believe that it is vitally important for civilian and military education tracks to be mutually supportive, but not interchangeable, and demonstrate the academic rigor that results in drastically increased awareness and understanding; however, there are some barriers to properly educating our force with what I consider to be the necessary blend of civilian and military perspective. The first and perhaps most difficult barrier is time. The time commitment required to maintain proficiency in martial skills can make additional civilian academic pursuits seem overwhelming. In many cases, the operational tempo (OPTEMPO) does not allow for absences from work for any substantial length of time, and having been at war for nearly 16 years, the stressors affecting military families have never been greater. Ergo, education tends to become a victim of competing priorities for our young people; it takes time to build a strategic thinker, and time is at a premium the further one ascends the ranks. It is imperative for leaders to help our service members balance their time so that they can begin creating effective time management habits early on.

Culture is the second barrier to enlisted civilian education. Each branch of service has its own unique culture and perhaps sees the role of the senior enlisted leader differently. In the absence of a demand signal for civilian education, many service members are left thinking that they will never be asked anything related to strategic endeavors and subsequently, they fail to see the inherent value of improving communications skill or understanding more advanced concepts. The individual services must see the value in an educated enlisted force both from a force multiplier standpoint, as well as in terms of the benefits they will see within their own organizations. Without the proper culture, it becomes very difficult to get young service member to buy in to a civilian education.

The third barrier is that there is no law requiring senior enlisted personnel to possess a civilian education. This is certainly complicated by the aforementioned barrier of time, as the services don’t have to give you time to study or participate in a course. Affordability is another roadblock for many young service members, though fortunately, the Tuition Assistance (TA) program alleviates some of the burden by dramatically reducing the amount of money paid out of pocket. Additionally, more and more promotion boards are beginning to consider civilian education when selecting the most qualified personnel—and word is spreading.

"A balanced education rooted in both civilian and military disciplines will be an absolute necessity on future battlefields."

The fourth and final barrier exists within the non-commissioned officer corps itself: it is the faulty logic that, “if I didn’t need college, then they don’t need it, either.” Given the nature of modern warfare, this is a very dangerous stance to take. Technology and the speed of war are advancing at an exponential rate. The demands placed upon our young people to understand technology, critical thinking, research, writing and speaking will only increase as time goes by.  Thus, education will become a more and more decisive advantage for our force going forward.

A balanced education rooted in both civilian and military disciplines will be an absolute necessity on future battlefields. In order to be prepared for the uncertainty of the future—as well as the rapidly evolving nature of warfare—we must continue to embrace education, remove obstacles, and continue to develop our enlisted force as the decisive advantage that it truly is. I believe all of us will be better for it.